Gospel Musician, Anita Afriyie has slammed organizers of the Vodafone Ghana Music Awards (VGMA) for organizing what she called “a biased and bogus Accra-based” awards ceremony.
The Kumasi-based musician said her claim was based on the fact that organizers of the annual musical event only selects and award musicians based in Accra only.
“They have made the award an Accra event, so if you are not based in Accra, hardly do they recognize what you are doing in the industry if you are from outside of Accra…,” she said angrily.
The Adehye mogya singer who was on Adom Fm’s Entertainment Hall show with his producer said the one-sided nature of the awards was making it lose its credibility.
She further condemned the organizers for failing to nominate her more than twice in the gospel category of this year’s awards since according to her, her album reigned the musical genre diuring the year.
Her producer/husband, Daniel Kwabena Osei Jnr who appeared with her at the Adom studios also described the award as bogus stating that he was given the organizers two weeks to name her in more than two categories.
The husband also joined her is singing the chorus that it was time the VGMA award creativity in the music industry and cease awarding people ‘who sing Pentecostal songs and Catholic Hymns.’
He threatened the artiste would withdraw from the awards if their demand is not met.
Her song, Adehye Mongya she said was so popular to receive just two nominations.
The song “Adehye Mogya” from the album ‘My testimony’ was nominated in the Gospel Artiste Of The Year category which has No Tribe, Koda, Selina Boateng, Gifty Osei, Joe Mettle, Anita Afriyie and Evang. Diana Asamoah.
The second category is the Gospel Song Of The Year which has
Kyere Me Kwan – Emelian Arthur Feat. OJ & Esther Smith
Yento Nkyia – Gifty Osei
Osabarima – No tribe
Alpha & Omega – Selina Boateng Feat. Uncle Ato
Nkwa Abodoo – Koda
Adehye Mogya – Anita Afriyie
Hymn (Pentecost Soree Nwom) – Evang. Diana Asamoah
– 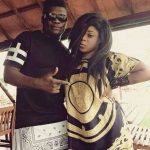