Bull Dogg has finally disclosed the basis that caused the alleged ‘feud’ between him and the self-proclaimed Dancehall King, Shata Wale to part ways from their business in the entertainment industry.

Bull Dogg and Shata Wale were known in the industry to be attaining higher heights from the Ghanaian music industry to the world.

The news broke out the two were no longer working together and it was unclear in the public domain what actually went wrong between the two buddies.

According to Shata Wale’s former manager, the Dancehall musician reported him to the German police to detain him for about a month overseas in the name of a laptop believed to be owned by the Shata Wale in his belongings.

Interestingly, the laptop, he said, naively contained pictures of his wife hence he was declined access to the laptop even though he told the police he had private stuff on it to delete.

He claimed it was delivered to a courier from the camp of the Dancehall musician even though he had explained all he could but to no avail to re-claim possession of the laptop to wipe the pictures.

He further maintained that, when he had the opportunity to return to Ghana after the police contention abroad, he personally doesn’t live on assumptions so it was confirmed to him by one of Shata’s camp boys that he had the pictures.

“I learnt he had naked pictures of my wife. No one has the right to those pictures. He crossed the line to possess that. It went beyond music. It is true, that’s what made me say there is no way to continue…”

“When I got back, I left my luggage with one of his guys and he informed me. I don’t run on assumption. He made the German police almost arrest me that I have stolen his laptop. Unknowingly, I had to return the laptop to the police and it contained nude pictures of my wife…” he said.

According to Bull Dogg, the matter was reported to the Ghana Police Headquarters where they were invited.

During the investigations and discussions, Shata Wale showed the naked pictures of Bull Dogg’s wife to some of the policemen.

“When I left the laptop he came for it. He confirmed it at the Ghana Police Headquarters. He came there showing the naked of pictures of my wife on his phone to the police. There was an audio tape confirming he had the pictures…”

When asked by host of Drive Time on Joy fm, if he will ever work with Shata, he stressed boldly never to work with him even if he’s paid a million dollars, he added that, Shata had cross the line of being friends hence it went beyond music and nothing was left than to part ways with him.

He revealed it wasn’t easy calming his wife down during the time but they only hoped Shata Wale wouldn’t do anything ‘stupid’ with it, besides he had received a lot of counsels and revelations from renowned dignitaries in the country not to push the matter further so he heeded.

“Something talked to me; reason I did not attack him. I had listened to a lot of counsels. People talked to me and there were some revelations that I paid heed to…”

“I spoke to my wife about him. We calmed the atmosphere. We hoped he didn’t do anything stupid about it…” he said.

With all this happenings, the music producer said he doesn’t miss him but very proud of him and regards him as one of the stars a lot of the upcoming artists can look up to.

“I don’t miss him, not at all. I am proud of him. He is one of the people a lot of people should look up to. I don’t feel I should work with him. I love my family and anyone bringing issues to affect my family, would be testing me…” he noted. 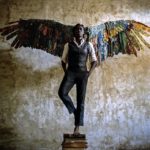