You recall that Simpa Panyin previously told you that Winneba is a town of festivals? The biggest festival in Ghana has been known to be the Aboakyer festival. Aboakyer is celebrated every first Saturday of May. That is a traditional festival connected to the roots and ancestry of the people of Simpa (Winneba).

The Akomase festival, which we share with our brothers in Awutu Senya, has been defunct for sometime now, but efforts are being made to revive it. It is the only crying festival in Ghana. It is usually celebrated in September/October to remember our dead ancestors.

Anyway, it is Christmas, and I have not heard that it is Christmas. That is because in a week’s time, Winneba will come alive again. We are going to have our Kaakaamotobi music and dance festival. Children, youth, adults, visitors, and tourists will all flood the town, for one reason, to celebrate Winneba’s Christmas.

But Christmas is not part of the festivals we celebrate. No. Winneba does not celebrate Christmas. When I was a child there was never any occasion that children dressed up for Christmas, or visited friends and families for Christmas related activities. We never experienced the Christmas atmosphere. The Christmas festival is essentially ignored during the time when everyone else was celebrating.

The story has not changed. Winneba still does not celebrate Christmas. For over 60 years we have lived the life of Disneyland precision. For over 60 years we have created our own mind-blowing aesthetic living costumes fit for the gods. We have used our love for colors, our love for music, and we have combined the two to perform the most patronized paid festival in Ghana.

Winneba is noted for its unique Fancy Dress festival with Brass Band music. By nature, music is imbued in our DNA. It was therefore not surprising when the National Academy of Music (NAM), now the Central Campus of the University of Education, Winneba, Ghana’s first ever public music college was established in Winneba. It used to be that every individual scholar who hailed from Winneba was expected to be able to play at least one musical instrument.

Kaakaamotobi, as the festival is locally known, is celebrated January 1st, every year. This year, for some reason, it is taking place on January 2nd, because the election pushed us to the wall, and also January 1st falls on a Sunday. The Fancy Dress festival is a competition between four groups; Nobles, Egyaa, Tumus and Red Cross. It is the most watched, and celebrated festival in Ghana, only second to Aboakyer festival.

The Fancy Dress festival began in the 19th century with British and Dutch traders who plied their trade in Winneba (then known as Simpa). History has it that the British and the Dutch who started the festival wore assorted masks and colorful costumes to celebrate the new year. The then masqueraders danced and drank in bars to entertain their customers.

Organized at the Winneba Advanced Park, the program starts at 10am, with the arrival of the masqueraders and dignitaries. The venue is full by 9:30am, and only those who come early are able to secure a front seat in order to fully watch the masquerading performances.

The celebration of the festival used to be spontaneous, and did not come with any competition, or groupings. Individuals wore their colors, and danced to tunes from Adaha music. Later, Mr. Janka Abraham, who hailed from Saltpond but settled in Winneba, and worked as a bar attendant, incorporated the masquerade tradition into the local customs.

In 1923 Mr. Janka Abraham together with his friend, Mr. A. K. Yamoah, formed the first group, Nobles, also known as group Number One.  Reports has it that the members of the Nobles group would gather before dawn on New Year’s eve, dressed up in costumes such as garb of doctors, nurses, teachers, ministers, pastors, farmers, fishermen, prostitutes, pastors, drivers, cowboys, sailors and angels.

That is exactly what is still happening. The masqueraders use current events and personalities to profile themselves in mask. And they create color in heaven. I have seen Presidents all over the world being recreated. I have seen the festival being used as a tool for addressing social political issues.

The idea was to imitate the various town professions and to deliberately and satirically misrepresent the life and the dressing styles of the Europeans. The troop would then parade through the streets of Winneba, backed by some fast-pace music known to the local people as Adaha music, and this celebration would continue all day into the evening.

With time the membership of the Nobles group grew bigger than anticipated. Consequently, the then paramount chief of Winneba, Nana Kow Sackey and some elders of Winneba formed Egyaa (also known as Number Two). This group was based at Aboadze, a fishing community in the town.

The name of the festival was changed from Masquerading to Fancy Dress because the Egyaa group, which was made up of fishermen who spoke no English, had difficulties pronouncing the word “masquerade.

Four years later, members of the Gyartey family (represented by Mr. Arkoful), and his two friends, Opanyin Kweku Akom and Opanyin Kobena Nkebi, formed another group called Tumbo Rusu. The name is commonly pronounced as Tumus, which also means the sound of a blacksmith. This group later became known as Number Three, and they are based in Donkoryiem area, opposite the Sacred Heart Catholic Church, in Winneba.

History has it that the membership of Tumus were from the Catholic youths who were slightly educated, and who are from local fishing communities. It is believed that the European priests financed their yearly costumes and masks, and because the Catholic Church was paying for the costs of this group, they became the most resourced, envied, and successful amongst all the groups.

Later, in 1933, Mr. A. W. Yamoah, the brother of Mr. A. K. Yamoah formed his own group and named it Red Cross, which was later known as Number Four.

Obviously since 1933, we have maintained four groups within the competition which has become a generational pride. Each of the four groups maintains an average membership of 100, and membership entry is based on either inheritance from a family person or by a justification of extra-ordinary dancing talent.

Rehearsals for the competition start as early as September, and costume planning begins in October. The average attendance at this annual event now stands at 10,000, with patrons coming from all over the country.

At the moment there is no masquerader available for me to talk to, even to give a hint of what patron should expect this year. All of them have gone hiding in the bush for their rehearsals. Even their costumes are being sewn in the bush, so that no one could have a hint of what they will wear. The only answers I keep receiving from the executives of the Masquerade Federation is that patrons to this year’s festival should expect Onaapo. 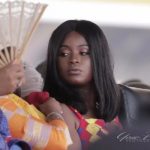