information available to Attractivemustapha.com is that , Police officers at the police depot at Patasi Kumasi in the Ashanti region have allegedly assaulted movie director Frank Fiifi Gharbin for filming them without permission.

According to an eye-witness, the award winning movie director Frank Fiifi Gharbin was taking pictures for his local project, when the police allegedly assaulted him for filming them.

“The Police always preach against mob justice but I don’t think some of them are ready to help stop it. How can you beat me and slap me just like that without any reason? Even if I have offended why don’t you take me to the charge office” he lamented.

When Frank was asked what triggered the slap, he said “I was taking shots for my work whiles the police were also sipping their drinks and they got fumed up with anger thinking I am filming them. One approached me and the rest from nowhere appeared and they all started giving me slaps.”

Gharbin also questioned the police through the media by saying “why will you (police) drink before you go on duty when you know it is wrong”.

According to the movie producer he asked them to stop beating him and instead take him to the charge office but that even worsened the case. 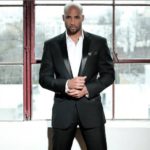