But rumour broke a few months later that there was a serious misunderstanding between the two parties.

It was later confirmed that Kwabena Kwabena and Papa Loggy have gone their separate ways despite the release of ‘Tokro’ under Loggy Entertainment.

Papa Loggy shared his side of the story on some entertainment platforms about how Kwabena Kwabena borrowed money from him.

But in an exclusive interview on Anigye Mmre, an entertainment talk show on Accra-based Onua FM, Kwabena Kwabena said he only had a verbal contract with Papa Loggy of Loggy Entertainment.

The ‘Aso’ hit maker said, “We shot a video of the song ‘Tokro’ few weeks later [and] he said he has signed me. What are the details of the contracts?”

“We are in an industry where we know each other. You can give a person some trust based on his reputation with some people. The whole thing looks like a scam, Papa Logy was never my friend and I wanted to even record a song with the title ‘Voice Note’ but I had to stop.” 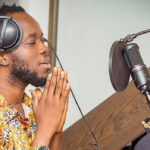