Kwame Asare Obeng popularly known as Aplus has said if 2018 saw him stand up against corruption, 2019 is the year that will see him fight one-on-one with corrupt personalities in the Akufo-Addo government without fear or favour.

Consequent to that, MyNewsGh.com has confirmed that Aplus has authored a long petition addressed to the office of the Special Prosecutor Martin Amidu on alleged corruption involving Minister of Communication Ursula Owusu-Ekuful.

It is unclear what the content of the petition entails, but Ursula Owusu-Ekuful has been in the news for many good, bad and ugly reasons since she took over the Communication Ministry in 2017.

APlus who indirectly confirmed the petition to MyNewsGh.com said in 2019 he wont be intimidated by anyone including Communications Minister Ursula Owusu-Ekuful.

Last year, APlus was sued by the formerly loudmouthed minister because Aplus had suggested she was a “thief” over some alleged shadiness in her handling of Kelni GVG contract which he a called “stinking coverup”.

Aplus said, “Kwesi Nyantakyi is only being sacrificed to cover up the 89/178 million dollars GVG Kelni Stinking scandal.”

Ursula Owusu-Ekuful demanded an immediate retraction and apology and threatened suit but Aplus ignored her. She went ahead and sued him but later withdrew the suit under dramatic circumstances.

A Plus is now serving her notice that 2019 cannot be a year of rest for her and that she cannot intimidate him.

“There is not a single person in this country who is paid with tax payers money who can intimidate anyone.” he wrote.

“When she realised she could not intimidate me she run to court to tell the court she can’t find me. Liar liar!!! So I walked to the court and picked the writ up myself and she never came back. She has to apologize to me for wasting my time. If she want to follow it I’m here and ever ready to face her.” he jabbed.

It later emerged that the accusations had to do with the two putting pressure on the CEO of Korle-Bu Teaching Hospital, Dr Felix Anyah, to back an on-site revenue-collection contract at the hospital to UniBank.

The Commission on Human Rights and Administrative Justice (CHRAJ) was later petitioned to investigate the case. They were eventually cleared of any wrongdoing after its investigations.

A-plus subsequently issued an apology for his comments, saying his approach was wrong. 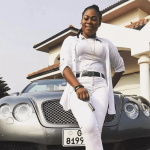 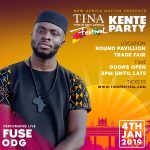