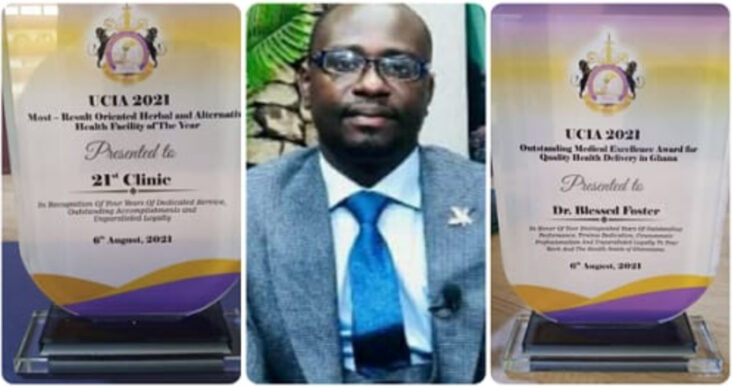 Chief Executive Officer (CEO) of 21st Clinic, Dr. Blessed Foster has been awarded for his tireless efforts and contributions to the transformation of the country’s healthcare delivery.

Dr. Foster, who has successfully positioned 21st Clinic over the years into a solid and trustworthy health facility, was presented with an “outstanding medical excellence award quality health delivery in Ghana” during a colorful ceremony over the weekend.

The prestigious award was presented to him by the United Clergy International Association (UCIA) during the 16th Ever Achievers Leadership Awards held at the Golden Tulip Hotel in Kumasi.

UCIA said it settled on Dr. Foster for the award because of his “distinguished years of outstanding performance, tireless dedication, consummate professionalism and unparalleled loyalty to your work and the health needs of Ghanaians.”

According to the UCIA, they are highly impressed about the outstanding performance of 21st Clinic over the years in making sure professional healthcare delivery remains their standpoint.

A citation from UCIA said, “The UCIA 2021 Most – Result Oriented Herbal and Alternative Health Facility of the Year presented to 21st clinic in recognition of your years of dedicated service, outstanding accomplishments and unparalleled loyalty”.

Reacting to the win, Dr. Foster said he feels humbled as his positive efforts have been recognized.

“We give the glory to God, our hardworking workers and the general public for the support all these years to enable us win these prestigious awards. One for myself and the clinic – this is a big win for us all. These award also goes to our federation –because we are working together to sustain the betterment of herbal medicines. We have won several awards over the period but this particular one comes in a special form to all of us, and a big congratulations to the whole team, we shall do more” he said.

The current win comes as no surprise to many as 21st Clinic has for some past years received all the endorsement from top personalities in society for their experience delivery in herbal healthcare issues.

“The sickness started in India where I was at the time and I went for treatment there. Upon my return to Ghana, I was admitted at the Police Hospital for three weeks as I could not walk. I was having pains in both legs, which affected my going to work, a whole year before my term ended I could not go to the office due to the pains. I initially thought I was having heart problems, after series of tests including an MRI I was told the pain I was feeling was in my waist and I had to be operated on. Much against the doctor’s advice, I declined to undergo an operation because I was afraid of the procedure,” she revealed.

The former Member of Parliament for Oforikrom continued, “one day while returning from Accra upon reaching Tech. Junction, I heard an announcement by 21st Clinic speaking about some of the ailments they could cure. I then picked the contacts of the clinic and then had a conversation with one Dr. Asare. He and other medical officers visited me at home and did an assessment on me and begun to give me home care for which I was very happy because I could not move about.”

Mrs. Agyeman, added that “at a point in time I felt my leg was dead because I could not feel it, it was numb. They provided me with home care, now I feel no pain and I can now step on my feet. It’s been one year now that they started taking care of me, I’ve now become an ambassador for 21st Clinic and I’ve directed many people to the facility for treatment and they are giving testimonies. When it comes to the treatment of sciatica, I can vouch for 21st Clinic, they are the best. Whoever is sick should go there and back the doctors there with prayers and in no time they would be healed.”

The only health category at the event was for 21st Clinic.

He has a strong, consistent profits and market transformation which has earned him rapid image in the industry with exceptional sales and operational performance, growing 21st clinic from one branch to 15 branches in seven administrative Regions in Ghana and has accelerated growth of the clinic from 20% loss to 15% profit.

He was formerly the Consulting Doctor and Outreach Coordinator at Diamond Life Herbal Clinic at Techiman in the Bono East Region of the Republic of Ghana from 2012 – 2015 growing the firm from stagnant performance to premier provider of Herbal Diagnosis and Treatment Centre. He established 21st Clinic in 2016 and has been playing the role of Chief Executive Officer till date.

He identified and captured fast-growing market in SCIATICA diagnosis and treatment and capitalized on healthcare industry expertise to create number one specialty provider-building end-to-end services and forging strong network of doctors, clinics and regulators.

Under the supervision of Dr. Foster, 21st Clinic has been able to among other things, assembled a team of highly trained health professionals, dedicated to healing and restoring hope to sick.

21st Clinic international partners in Cuba, Canada and India, give it access to 21st century technologies and techniques that can’t be found locally. 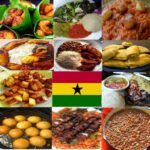 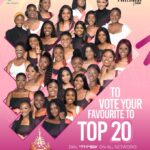